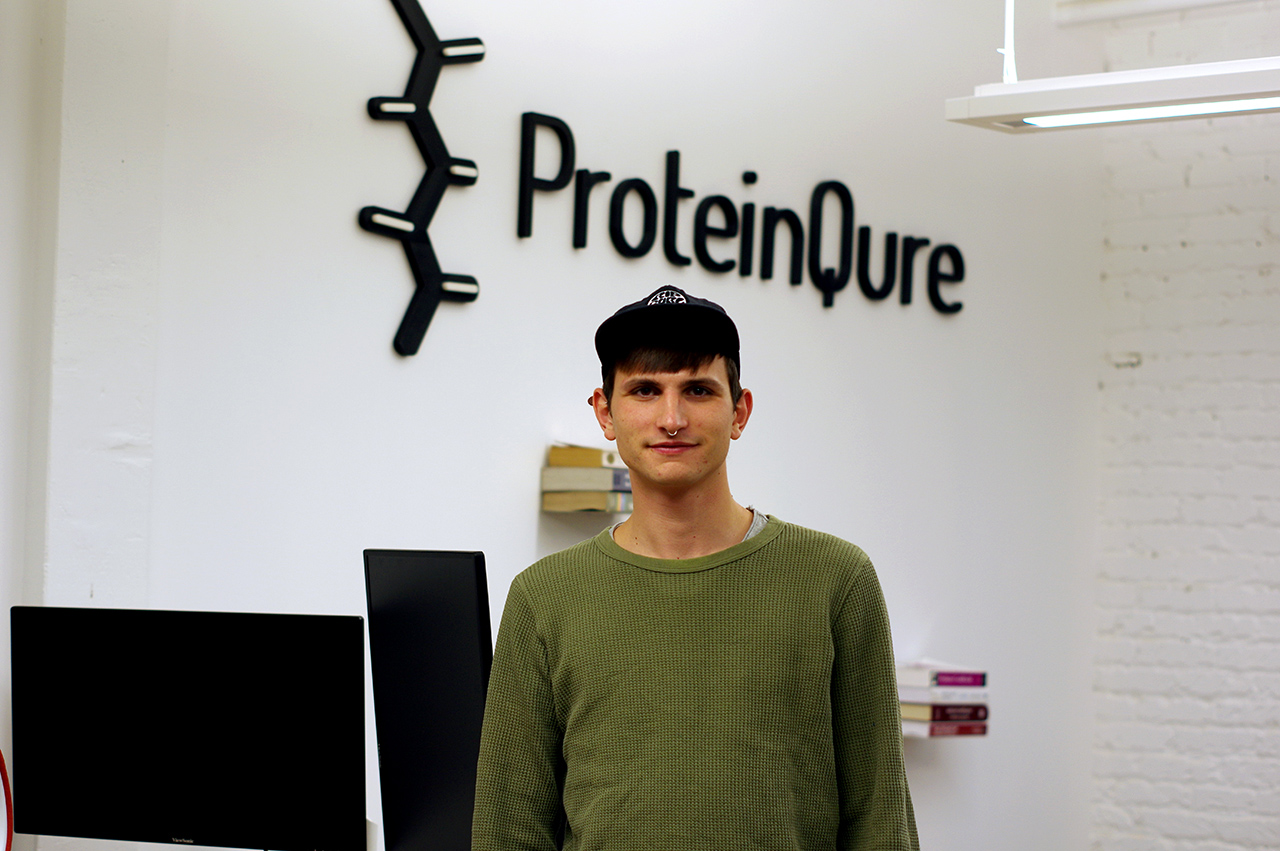 CRISPR is all the rage these days in the Biosciences, for its ability to edit DNA and to potentially treat and/or cure a host of inborn illnesses and viral infections; however, there could be another method on the horizon for treating disease.  This new method is being pioneered and explored in part by Mark Fingerhuth, CEO and co-founder of ProteinQure (pictured above).  Perhaps, this new method shouldn’t be categorized as new, as the idea has been around for some time, as it involves molecular modelling of proteins.  Fingerhuth and his co-founders are obsessed with proteins, and much like DNA, proteins are essential building blocks of life; they are the focus of their new company, which looks to make profound changes in the way drugs are created.

While many new medical startups are researching uses of CRISPR-Cas9 for example, or to create and refine iterations of it (e.g. Cas13, CasX) at a molecular level, ProteinQure looks to engineer the 3D structural design of proteins to aid in the development of new drugs.  The crux, however, is getting proteins to adhere with precision to their intended target, and as shape dictates function, that’s where protein folding is key.  Welcome to the wondrous world of computational protein drug design. 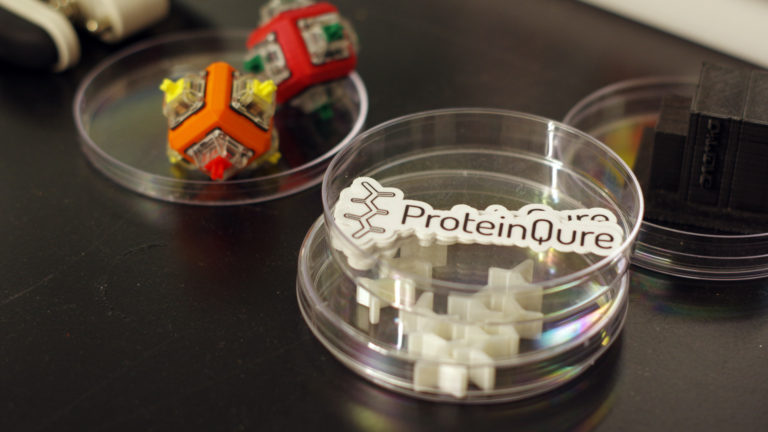 Fingerhuth is young, intelligent, and looking to change the world of medicine; along with co-founders Christopher Ing (CSO); Lucas Siow (Head of Business Ops); and Tomas Babej (CTO).  This team hopes to pioneer new research into protein-based treatments that will create drugs whose efficacy may one day treat and theoretically create functional cures for diseases ranging from auto-immune disorders to cancer.  In short, this is all vital work in the medicinal landscape, and this startup is not going unrecognized: having garnered much attention, ProteinQure is now buttressed by and collaborates with IBM, Rigetti Computing, Fujitsu, Microsoft, and many other high-profile tech companies.

Each of these companies are assisting in various ways in the development of new protein models.  A tagline on ProteinQure’s website reads, ‘Protein Drugs Engineered, Not Discovered’—engineering that requires many moving parts to its configuration, encompassing the use of artificial intelligence (AI) and/or machine learning (ML); algorithmic equations; and quantum computing.  When combined, these functions presumably allow for the ability to create drugs with greater speed and probability of efficacy over traditional research methodologies, which are, more or less, “discovered”.  They are in essence taking control of what can be controlled at a molecular level.

Algorithms are a key component in ProteinQure’s overall process of engineering drugs.  Their calculations are formulated to find optimal folds for a protein so that it latches onto its target as accurately as possible; the plan is to continually run and refine algorithms through trial and error via a simulator until it does so with greater, ideal precision.  Computations of this kind are arduous and require heavy-lifting in silico and are done so with the latest in quantum computing—a tool that makes this venture all the more viable. 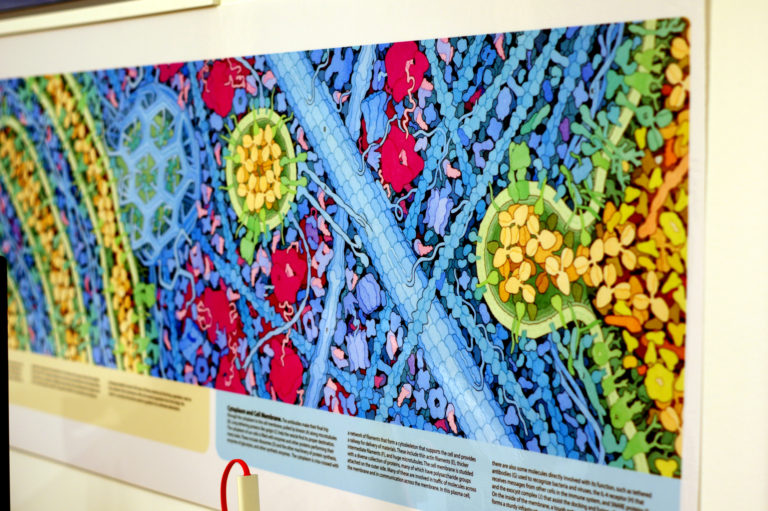 Qubit ‘Til You Make It

There are few companies in this space—a Google offshoot among them—so the conceivable idea of folding proteins to treat disease is largely dependent on emerging technologies, namely AI and quantum computing.  It’s early days for quantum computing, but they are powerful and generally the size of a walk-in closet.  Without them, it is unlikely that ventures like ProteinQure would be met with so much enthusiasm.

Near perfect quantum computing is a decade or more away (some argue less), but near-term quantum computers use a hybrid process of algorithms to fill the current gap, and that’s where Rigetti Computing—a recent partner of ProteinQure’s (and others)—have stepped in.

According to Fingerhuth, Rigetti Computing have ambitious plans to build a 128-qubit chip within a year (IBM has also recently unveiled their IBM Q with its supposedly less error-prone 20-qubit computer).  Rigetti’s current quantum offerings provide companies like ProteinQure access to develop quantum programs in a virtual environment.  The partnering has allowed for ProteinQure to create an open-sourced app to be shared over Rigetti’s new Quantum Cloud Service, making it available to independent researchers and pharmaceutical companies.  ProteinQure will provide their app within Rigetti’s Forest library—a quantum programming environment—where programmers can download an SDK.

In order to fold proteins, computational requirements have traditionally been restrictive due to technological shortcomings, or at least, they have been until now.  With the advent of quantum computing, the ability to produce a new protein fold, which can take weeks if not longer (per structure), can be significantly reduced, and considering that many permutations of the protein have to be created and simulated to find an ideal entry point for its target, quantum computing saves time and many, many dollars.

Since a combination of algorithms, quantum computing/machine learning, are all necessary in finding optimal folds, it becomes a juggling act for ProteinQure’s admin team to find all the partners and collaborators suitable for their short and long-term ambitions.  Fingerhuth, when interviewed, seems chuffed that all the right pieces are falling into place, much like the proteins he wishes to see attach like puzzle pieces.

When asked to describe the science behind protein folding, Fingerhuth takes a pen and draws what they’re attempting to accomplish; a simple yet complex illustration of a protein’s 3D structural biology.  With a glint in his eyes, it’s apparent that these scribbles are the start of a whole new world of opportunity and discovery.

We also discussed the current state of AI, chess, AlphaGO, and specifically Google’s AlphaFold (DeepMind), and the differences between neural networks and reinforcement learning.  For a company whose algorithm changed the world, folding proteins seems like a logical extension for Google’s portfolio, but Fingerhuth is somewhat surprised by Google’s plans, mainly baffled for their taking a neural-networked based approach in their foray into combinatorial drug design.

ProteinQure is at the heart of what The Economist has recently termed ‘Maple Valley‘; a name derided by many in Toronto

ProteinQure—based in Toronto’s vibrant downtown and ever-growing tech hub—is perfectly situated in southern Ontario along a corridor dotted by tech companies from Ottawa to Kitchener-Waterloo.  UBER is but one company that has recently planted itself in Toronto to specifically soak up its AI talent, a list that includes Microsoft, Amazon, Nvidia, Google and others.  This area is significant for ProteinQure in that it is arguably considered the birthplace of AI, ML, and a nerve center for quantum computing—all conveniently located for future collaborations, computational and talent acquisition needs. 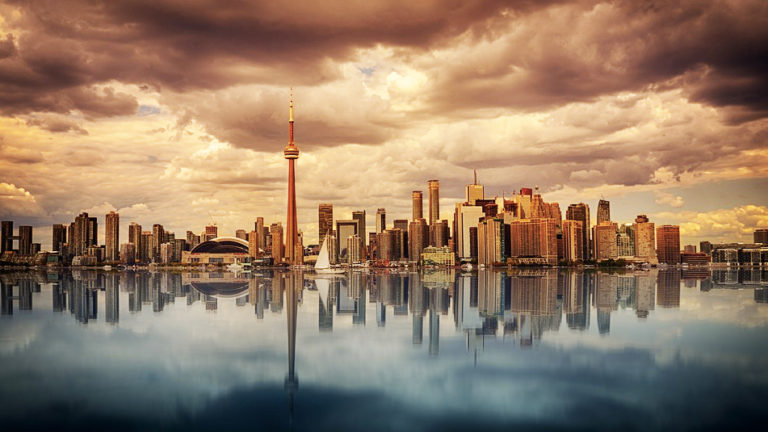 ProteinQure has ostensibly positioned itself around a growing pool of expertise, while also having partnered with companies that coincidentally also have Canadian roots (e.g. B.C.’s 1QBit, and DWave).  They are also guided by advisors, professors and experts in AI, like Peter Wittek of University of Toronto (UofT) and the Vector Institute; The Creative Destructive Lab, a UofT spawn and a “seed-stage program for massively scalable, science-based companies”; and Toronto-based Xanadu, a company pioneering light-powered photonics quantum computing.

The company is also a short drive from the Perimeter Institute for Theoretical Physics, a giant research and educational hub that will foster future generations ready to launch their own scientific breakthroughs.

Aside from Toronto’s historic connection with AI—birthed by Jeff Hinton, a professor at UofT and credited as its ‘godfather’ —Canada in general is considered “one of the great AI superpowers”.*  Even California-based Rigetti Computing’s CEO and founder, Chad Rigetti, is Canadian.  Perhaps, there’s something in the water, but it seems Canada as a whole may be on to something.

“Maple Valley” seems to be blossoming as quickly as new high-rises are sprouting throughout the inner downtown core.  There is an air of untainted optimism, that the future is in the hands of emerging technologies and ideas that are ricocheting all around this geographic  incubator of ambitious companies and world-class universities.  And it seems, at least for now, ProteinQure’s future looks equally bright and exciting inside the undiscovered country that is algorithmic drug design.

*by journalist Ashlee Vance, in a now very popular Bloomberg video ‘The Rise of AI‘

How we perceive, compute, think, create bonds, and our day-to-day behaviors, can all be attributed to the almighty #algorithm: media; medicine; AI; journalism..

Why the world of #proteins and #drug design is about to get more interesting. Find out about #Toronto-based @proteinqure and the work they're doing with #AI and #Quantumcomputing, as they look to change the future of #medicine. @mark_fingerhuth @rigetti : http://algorithmicculture.com/proteinqure-ai-and-the-future-of-drug-design/

Livin' In An Algorithm 🌎🌍🌏@AlgorithmicMark·
26 Feb

⚠️ Confirmed: Real-time network data show a major disruption to #Ukraine's internet backbone provider GigaTrans, which supplies connectivity to many other networks. The incident comes as heavy fighting is reported in #Vasylkiv and #Kyiv 📉

Introducing #AlphaCode: a system that can compete at average human level in competitive coding competitions like @codeforces. An exciting leap in AI problem-solving capabilities, combining many advances in machine learning!